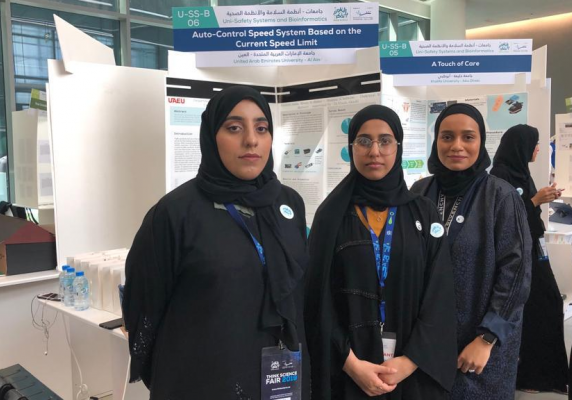 In order to cope with extreme speed, which is one of the most important causes of traffic accidents, a group of students: Moza Al Shamsi, Shamma Al Badwawi and Zekriat Al Dhuhoori decided to invent a device that automatically fixes the car speed according to the prescribed street speed.

The students presented their project at the “Think Science” Fair at Khalifa University in Abu Dhabi under the category of safety and health systems, to reduce the rate of accidents caused ". 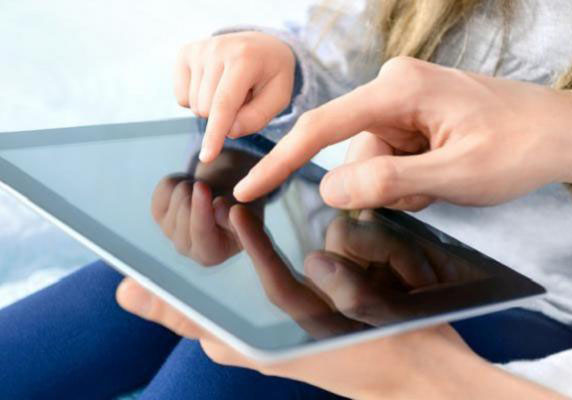 Two UAEU Students invented a scientific application for people of determination that serves people with visual impairment and blindness. The smart application, called "uSTEP", is easy to download via smart phones, and provides several services for people of determination that meets the requirements of their daily lives. It also has won the Hamdan bin Rashid Al Maktoum Award for Distinguished Academic performance, under the category of the best scientific innovation. 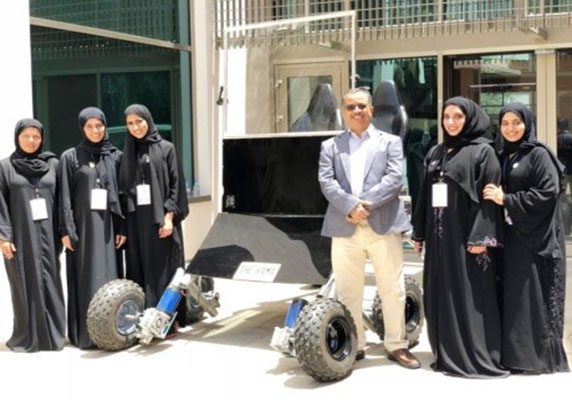 A group of UAEU Students: Anood Al-Katheeri, Fatima Al-Nuaimi, Mai Al-Mazrouei, Safia Mohammed, and Sheikha Al-Naqbi, College of Engineering, Department of Mechanical Engineering, have invented a “Ram Car for Mars” project, which can work on the red planet and is suited to surface conditions. It gives opportunities to astronauts to move from place to place in the future Mars missions.

The team explained that the car weighs approximately 450 kilograms, and operates with four batteries weighing 36 kilograms, that can be recharged using solar energy, which provides motors «electric motors» with energy, and move the wheels of the car. The car was designed based on the engineering design steps that are adopted in mechanical engineering where after the design stage, the parts of the car were built and installed, and the direction control was programmed to enable the astronaut to control the car. 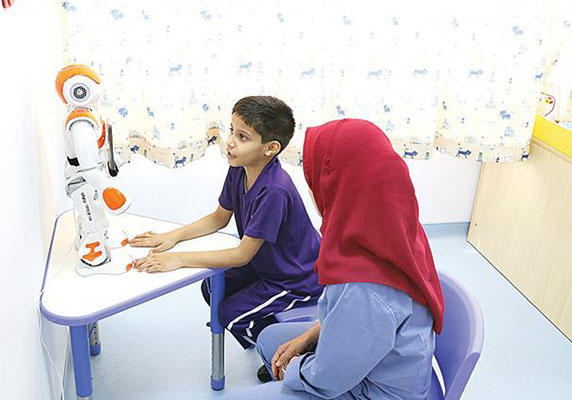 Robot in the service of people of determination

Al Ain Center for Care and Rehabilitation has started the experimental use of the NAO robot for students with intellectual disabilities, especially those with autism, in cooperation with the Artificial Intelligence Laboratory at UAEU. The robot works on enhancing visual communication, strengthens and helps prevent students from being distracted, increases their attention and focus while learning letters, numbers and shapes. It also develops their social interaction as it is equipped with fixed audio receivers related to speech recognition and analysis, this technique allows the student to understand the meanings of certain words, and allows them to understanding new words.